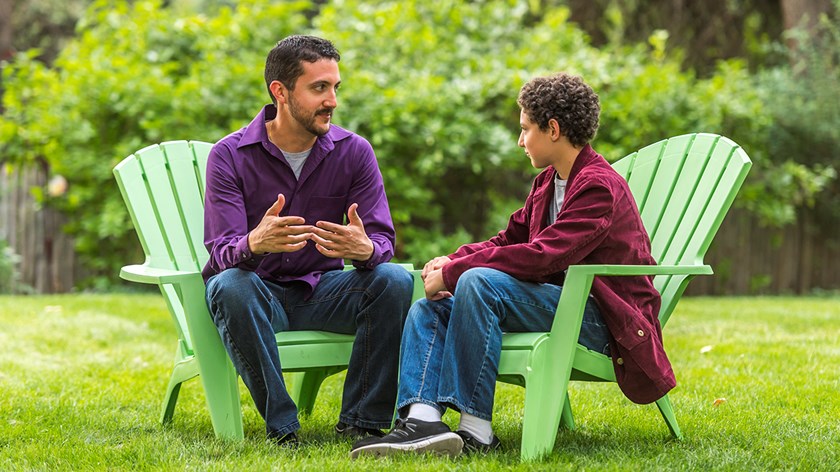 Depression and suicide can be tough to talk about with teens. Even adults have a hard time admitting when they need help. Our partners at Children's Hospital Colorado are experts at working with youth and have some dos and don'ts when talking about these sensitive subjects.

Suicide rates are rising in the U.S., specifically among kids between the ages of 10 and 14, according to the National Center for Health Statistics. That's true for depression, too: One recent Centers for Disease Control study of depression found that 5.7% of kids ages 12 to 17 met the criteria. Causes range from the increased use of cell phones and social media to major transitions or life events like family stress, family history or substance use.

"It's hard to identify any one reason or factor," says Children's Hospital Colorado child and adolescent psychologist Emily Laux, PsyD. "Every case is individualized and entirely depends on the child."

Whatever the cause, says Dr. Laux, there's a direct correlation between rising rates of suicide and depression, and it affects teens regardless of race, class or background. For parents, prevention starts with knowing the signs.

The transition from childhood to adulthood is by nature a stormy, stressful time of physical and emotional changes and challenges. So how do you know when a teen is depressed? It can be hard to tell, Dr. Laux admits, because moodiness is a built-in feature of the adolescent years. The big differences are length and intensity of symptoms.

Mood changes and feelings of sadness are normal, but they don't generally last for more than a few days. Depression involves feelings of hopelessness, anger and frustration that last much longer — and get in the way of daily life. Changes in eating or sleeping habits, a drop in performance in school or sports, statements of self-harm, loss of interest in friends, or activities they used to enjoy — all are indicators of potential depression.

A higher risk of suicide for depressed teens

Adolescents and young adults are still developing in the limbic system of the brain, which regulates their emotions, as well as their prefrontal cortex, which is in charge of impulse control. Add depression to the mix, and the combination of intense emotional triggers with impulsive thoughts of escape puts adolescents and young adults at higher risk of making a potentially fatal decision.

Depression is far and away the greatest risk factor in suicide, but it's treatable with help. The key is to catch it. In fact, the American Academy of Pediatrics recommends annual depression screening for teens.

What to do for a teen with depression

Parents don't have to wait for a depression screening if they notice something off with their teen. A conversation is a great place to start. Depression is isolating, and just the process of bringing it into the open can be therapeutic in itself.

If parents do suspect their child may have depression, their best first resource is probably their primary care provider, who can refer to other resources if needed. Generally the treatment includes talk therapy and sometimes medication.

One big benefit to therapy: Parents aren't necessarily trained to see the signs of suicide, but a therapist is. By developing a relationship with the teen and family, a therapist can spot signs of trouble and treat them before they get worse.

How to talk to teens about suicide

Even if a teen isn't showing signs of depression, Dr. Laux says, the most important thing parents can do to prevent suicide is to talk to their kids about it. Like sex, drugs, bullying or any other topic facing teens, suicide is fraught with discomfort and stigma. Misinformation abounds — which makes it that much more crucial to discuss. And an honest conversation about suicide lets teens know they can come to you with issues if they need to.

Of course, suicide isn't the easiest subject to broach. Dr. Laux offers a few tips for getting the conversation started (and keeping it positive):

Do bring it up naturally

Leverage TV shows and media coverage of the topic to start a conversation. Dr. Laux recommends an indirect approach: "Something like, 'Hey, I read an article about this. What do you think?'"

Don't worry about "putting ideas in their heads"

"A conversation is not going to make a kid depressed or suicidal," says Dr. Laux. In fact, openly discussing suicide with teens can mitigate the effects of a suicide in a community, since "copycat" suicides are often fueled by glamorization and misconception.

Do counter the stigma

Anything a child interprets as judgment or stigma could cause them to shut down and not want to talk about it again. "If a kid does express those thoughts, stay calm," says Dr. Laux. "Take it seriously and listen, but as much as possible, contain your own emotional reaction. Kids are going to be hypersensitive to your perception of it, and a lot of kids will perceive a parent's fearful reaction as anger — which enhances the secrecy around it."

Don't try to fix it

Instead, hear teens out, be supportive and seek professional help. Stay vigilant of any patterns, mood changes, loss of hope about the future, or shifts in grades or sports performance.

Dr. Laux encourages parents to trust their instincts if their teen seems different. Call the suicide prevention hotline, a pediatrician or Children's Colorado; professionals can direct you to the appropriate help. If you think there's an imminent danger, emergency departments can provide psychiatric services.