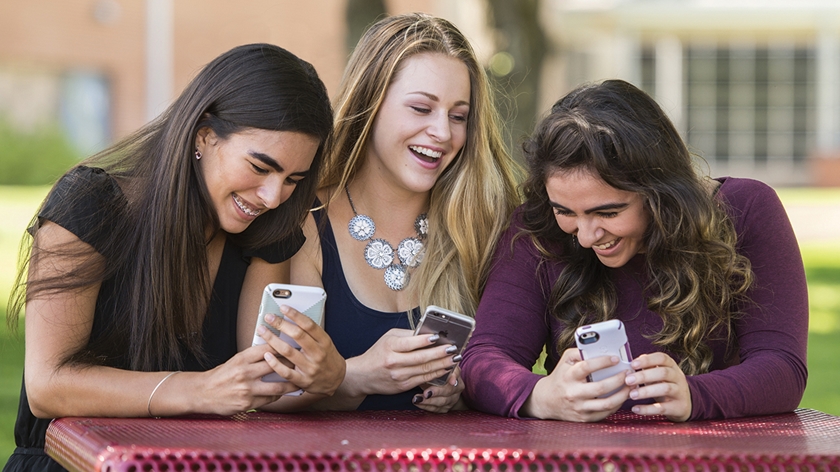 No matter where you are the chances of seeing someone on their phone are pretty high these days, and it's not just kids. Adults are just as guilty of being attached to technology, so how do we make sure we're setting a good example and maintaining a healthy balance between virtual reality and actual reality? Our partners at Children's Hospital Colorado have some thoughts:

A few hundred years from now, it's easy to imagine some future society splitting human history in halves: before the internet, and after. Probably nobody is more attuned to the transformational effect the internet has had on society than parents of teenagers today. They grew up on one side of that line. Their kids are growing up on the other.

About 73% of teens had access to a smartphone in 2015, and that number continues to increase. Today's teens don't just have access to the internet. They have access to it at nearly every waking second.

"You can see it just walking around school by how many kids are on their phones," says Ian, a 15-year-old from Highlands Ranch. "You'll see kids sitting right next to each other, texting each other."

Ian's refrain is a common one for adults: Teenagers now spend too much time on phones. They don't interact face-to-face. They don't spend enough time in the real world.

But for many teens — Ian included — it's more complicated than that.

"I don't think a lot of parents understand how much value kids put on social media and how it can affect them," says Chloe, 16. "Sometimes parents just kind of push it off, like, 'That's stupid. Get over it.'"

Jace, 14, agrees. "As teenagers we're already self-conscious, so that stuff makes it hard to talk about with your parents. Because it's like, 'Yeah, okay, it's dumb, but I care about it.'"

Both Jace and Chloe actually want to talk to their parents about it. That might be surprising, given the eye-rolls many parents might expect. But it's a big part of their lives, and they want their parents involved. To monitor and set limits, yes, but even more, to support and approve.

"I mean, they shouldn't be helicopter parents about it," Chloe says. "But more just like talking about it and helping us figure it out, so you don't get sucked too much into that world."

Where is your child spending time online?

Children's Hospital Colorado child psychology team say that's pretty much in line with what she recommends. "Kids can get into trouble with their social media alter-ego when, instead of an extension of real life, it becomes a replacement. It's hard for teens to understand the bigger implications of their decisions. Even more important than setting limits is helping them understand the structures and parameters around those limits, so they can learn from them."

For Jace and Chloe, the implications have mostly been positive. Platforms like Snapchat, Facebook and Instagram widen their social circles and deepen their access to them, letting them connect with friends in ways that augment their face-to-face interactions, rather than replacing them. But while social media can expand the positive sides of social interaction, it can also inflate the negative sides.

"Keeping up your popularity is hard," says Jace. "I'm not saying I'm super popular, but I feel bad for girls who are. It's stressful when you have so many people counting on you to be beautiful all the time and be that person they want you to be."

"I started comparing myself to other people," agrees Shirley, 19, who struggled with her self-image as a younger teen. "I saw my friends starting to change the way they looked, and because I was surrounded by that, I felt like I had to, too. You start to overthink every little thing you do."

The intimacy of the internet

Of course, media depictions of beauty have been a force in young girls' lives since before the internet. The difference, Chloe notes, is that now, the standard of perfection often comes from people they know. Chloe's not the only teen she knows who's taken what she only half-jokingly calls "Instagram stalking" to an unhealthy degree.

"It's like a highlight reel of other people's lives," she says. "You see people looking so perfect and you think, 'My life should be like that.' I don't think my parents had to go through that. Maybe people didn't compare themselves as much to other people, because they weren't comparing themselves to what other people were doing on their phones."

The ability to curate a self-image online, she notes, not only creates a pressure to measure one's life against the curated lives of others, but also the pressure to present an idealized image of one's own.

"For me, it's like, if people don't like my photo enough times within a certain amount of minutes, I'll take it down." She laughs. "It's completely irrational."

But knowing it's irrational doesn't make the feeling any less real. And the pressure doesn't just come from social media. Traditional media like magazines and TV still exert a powerful pull on kids' self-image, and the internet offers kids a breadth, depth and speed of media their parents never imagined as teens.

Navigating the world, online and off

"It's just the most entertaining thing out there," remarks Avry, 14. "You can watch a movie, but that's not that interactive. Video games are pretty fun, too, but there's just something unique about going down an internet hole of weirdness that nothing else can really supply. It's like, you could see anything you want to see, instantly. You just have to type it in."

That, too, can have positive and negative effects. Chloe likes the independence: that she can find out anything she can think of, just as quickly as she can think of it. On the other hand, Avry concedes, some of the things he's come across on the internet are "pretty horrible."

What our child psychologists find interesting is to see what happens when teens come into our program. It's a tech-free zone, and at first they are concerned about how they are going to handle this. But then they do fine. Whether they admit it or not, we believe most of them appreciate the break — and many of them do admit it. They don't want to be left out, but at the same time, it's a lot to manage and kind of a relief not to be dealing with it. Some of them have even asked their parents to restrict phone use just to have a reason to tell their friends they can't.

And it illustrates the perpetual dilemma of this brave new world, both larger and smaller, more impersonal and more intimate, more wonderful and more stressful than it was before. Today's teens grew up in this world, but just like generations of teens before them, they need help navigating it. They need guidance and a listening ear, and they're glad for the perspective — even if they don't show it right away.

"My mom's given me a lot of support just reminding me how great it is to be yourself," says Shirley, who heads to college this year. "At the time you don't want to believe that or think it's true. But then you get older, and you realize it is."