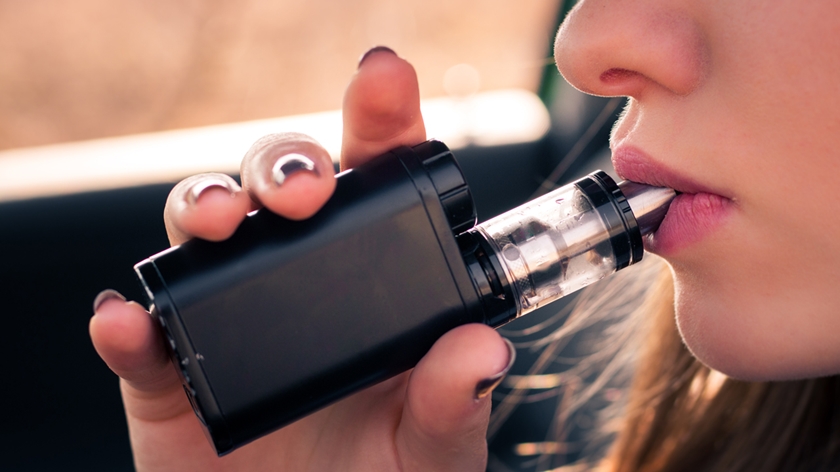 Turn on the news tonight or tomorrow and you'll undoubtedly see a story about vaping and teenagers. It's the hottest topic across the nation right now and at least 6* deaths and 380* lung-related illnesses are being blamed on vaping. How much do we actually know about vaping? It's no secret that traditional tobacco cigarettes are not healthy, but up until recently the general consensus was that vaping was a healthier alternative to smoking cigarettes.

So what's the truth behind vaping, especially its effects on teens? Dr. Grace Houser, a pediatric pulmonologist at Children's Hospital Colorado, breaks it down below and the statistics are staggering.

Less than 4% of high school seniors report daily tobacco smoking this year, hardly a fifth of where that figure was 20 years ago. It's a downward trend representing one of the most successful public health campaigns ever waged - but it comes alongside another trend, one in which many experts see tobacco's disturbing reflection.

Teen vaping is on the rise - skyrocketing, even, at a rate far steeper than tobacco's decline. In a national study published in December 2018, 37.3% of twelfth graders reported they'd tried vaping, up from 27.8% in 2017. And the number who'd vaped within the last 30 days nearly doubled, jumping from 11% to 20.9% in just one year.

In Colorado, about half of teens have tried it - the highest share of any state, as measured by the Centers for Disease Control.

At least part of that uptick seems to owe to misinformation.

How nicotine affects the teen brain

But the vast majority of vape products do. JUUL, far and away the most popular product (with a whopping 73% current market share), doesn't even offer a nicotine-free option. In fact, one JUUL cartridge contains about as much nicotine as a pack of cigarettes.

1: JUUL cartridge contains the nicotine of a pack of cigarettes

1/2 TSP: The amount of liquid nicotine it takes to kill or seriously hurt a small child

And nicotine - even apart from the tar and carcinogens of traditional cigarettes - has some troubling effects, particularly on the adolescent brain.

Human brains undergo a prolonged period of reorganization during the high school years. That makes teens especially vulnerable to nicotine, which exerts a powerful influence on their limbic system, the brain's center for cognition and emotional regulation.

By adulthood, teen nicotine users have lower cognitive function, more impulsivity and shorter attention spans. They have more depression and anxiety. Teens who use nicotine are more likely to engage in risky sexual behavior and use drugs.

Although the medical effects of tobacco use are pretty conclusive, it's more difficult to isolate the behavioral causes and effects of nicotine, Dr. Houser acknowledges. But in controlled studies of animals, scientists have found rats who got regular doses of nicotine used more opioids, amphetamines and cocaine when offered than those who didn't. In fact, rats treated with just one dose of nicotine showed measurably more sensitivity to adverse events later in life.

Is vaping safe for teens?

And on the pulmonary side, e-cigarettes don't look great either. They contain a wide range of chemicals, some carcinogens. One recent study shows e-vapor increases the production of inflammatory chemicals and disables immune cells in the lungs.

"The research is still evolving," says Dr. Houser, "but it's certainly not safe."

For Dr. Houser, it's a no-brainer. Teens who vape face a future of nicotine addiction, worse cognition and emotional regulation, and as-yet undiscovered consequences for the heart and lungs. There is no upside. Dr. Houser wants to spread that word.

HALF: Of Colorado teens report vaping at least once

"Identifying these cause-and-effect relationships takes a long time," she says. "As a medical community, it took us 30 years to recognize the connection between smoking and lung cancer. We want to warn people about the potential consequences of e-cigarettes now. We don't want to wait for those kind of studies to come out."

To help combat youth vaping, Children's Colorado's Government Affairs team successfully advocated for an update to the Colorado Clean Indoor Act during the 2019 legislative session. Thanks to support from our community, using e-cigarettes in public indoor spaces in Colorado is now prohibited. Learn more about our work in child health advocacy.