If you have ever been in the Gold Crown Field House during volleyball season, you have experienced the energy, spirt, and comradery of the league. That same environment is what drew Cindy in for multiple years, providing a competitive atmosphere to blossom her volleyball career. Every kid starts somewhere, and for Cindy it was with our Gold Crown Volleyball program, which she started playing in when she was in 5th grade.

Cindy, a daughter of Mexican immigrants (and fellow Gold Crown Volleyball coaches, Roberto and Sindy) grew up in Denver, Lakewood and Littleton. Her parents are passionate for volleyball, and instilled that same passion in Cindy at a young age. Growing up, her dream was to be just like her mom, the best volleyball player she has ever seen. They started their own volleyball club and the Lincoln feeder program, which is how Cindy spent her Sundays at the Gold Crown Field House, “the only days she would look forward to.”

She has endless memories from her days playing Gold Crown Volleyball, but one that sticks out in her mind is when she spiked the serve during a championship game. It was the momentum swing her team needed! Playing in the league helped her understand to “never underestimate teams since my team was known as the “scrappy one” and somehow, we still beat good teams.” She loved being known as a competitive player and used that as motivation to excel her volleyball career. She continued playing club and at Bear Creek High School. 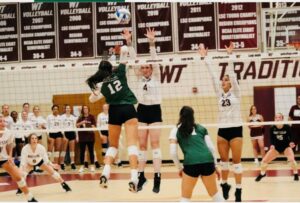 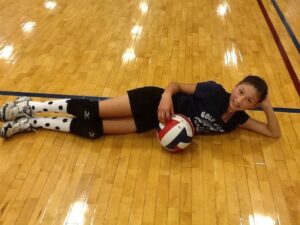 Today, Cindy earned a scholarship and is playing collegiate volleyball at Adams State University. She is double majoring in Business Marketing and Spanish. Her parents continue to coach in the volleyball league and mentor young athletes each year.

We will leave you with some advice Cindy has for young players. “When you’re young, you’re just playing volleyball and that’s the only thing that is on your mind. However, as you grow up, some might have their goals set and others may be lost about what to do next. My best advice is to play your hardest while you can because once you leave, there is no going back.”

We are delighted that Cindy found her passion and direction from our Gold Crown Volleyball League. Good luck with the rest of your college career and future steps in life.

We want to hear from YOU! If you have an alumni story to share, submit your story.